In April 2012 I started studying soil, after coming back from Nigeria where I got inspired by the soil I found there. My idea was to mix different soils (Nigerian soil with Dutch clay) and see what would happen with plants which were planted or sown in this mix. Unfortunately I was not allowed to take Nigerian soil with me. But noting could stop me, and there the idea was born.

After reading books and learning what soil was about, I discovered what was beneficial for soil and what was needed. I started testing and the first tests were on bonsai, herbs and trees in the garden.

Fagus Silvatica bonsai treated with Tibolar-RS. Within 6 weeks in late summer the results were staggering. 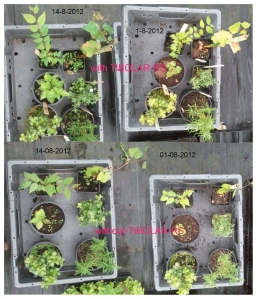 Herbs and seedlings results after only 13 days. Rosemary plant had much more roots and smelled very powerfull.

After aplying Tibolar-RS at the end of August 2012, it looked two weeks later as if a new spring did occur.

Soon the product I made was applied to fruit trees and the next year the results were pretty interesting.